Skip to content
Tigers In Tennessee: A Cameraman’s Terrifying Experience

I am a Knoxville-based production professional with credits varying from televised retail, (also known as home shopping), to sports production, commercials, independent feature films, and reality television. Most recently I completed a stint working within a major multinational media company.

A large part of my responsibilities included conforming US television programs to international broadcast and content standards. That may sound rather tedious but I found the differing cultural and political ideas of what is considered to be acceptable for broadcast to be quite interesting between regions as varied as Europe, The Middle East, Asia, and Russia, (yeah, Russia’s standards are a whole different animal). I could write entire blog posts just about how entertaining I found the British Ofcom report on attitudes to potentially offensive language and gestures on TV and radio, but I’ll leave that for another forum.

Working on The Hidden Tiger

With the pending release of the documentary “The Hidden Tiger”, it seems like a good time to share some of my own stories from the development and production of the film and, possibly, some of my own somewhat related stories from my decades in TV and film production. I have worked with Michael and Josh since long before the idea of this project was conceived and am proud to tell some stories of my own involvement.

If I’ve done my job correctly, you will not see me in the film. I did not get to travel with my friends to India or Nepal. My job has been, primarily, helping out with gathering b-roll and shooting interviews. I guess my most visible contribution was a shot you may have seen in the film trailer, that last shot where a very large and unhappy tiger charges the camera and gets really uncomfortably close to this camera guy. I’ll start with that story.

On the trail of the Tennessee Tiger 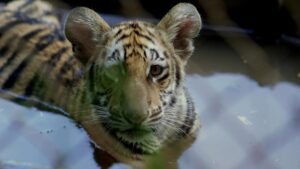 This project started when we were granted unprecedented access to Tiger Haven, a big cat sanctuary in Roane County, TN. We were all aware of Tiger Haven’s existence but, since they don’t allow visitors access EVER FOR ANY REASON, we had no reason to think we would ever have an opportunity to visit. Through their work on the previous films “Tails in Flight” and “A Southern Fix”, Michael’s and Josh’s relationship with the university’s veterinary hospital yielded an opening for a video project with Tiger Haven.

I didn’t go the first couple of times but Michael had begun building a relationship with the staff and the idea of “The Hidden Tiger” evolved from that meager start. Over the course of the early development of the project I had opportunities to tour and document the facility and even had a chance to film a batch of very young tiger cubs. Explaining the claw marks on my back to the girl I was dating at the time is another story, as is the tale of the day I was sprayed by a rather randy male lion.

A few years ago I recall Michael telling me that we had an opportunity to film the arrival of a tiger that was retiring to Tiger Haven from a major zoo and I was super-excited for the opportunity. We arrived to find a van from which extremely unhappy tiger sounds were emanating. This was the moment that I learned that tigers really don’t like sudden changes of environment. We met and talked to the zoo’s Director of Large Mammals and he filled us in on the process of moving the tiger from her travel cage into her new enclosure.

The cage she had travelled in was, essentially, a very large metal carrier much like one in which you might use to transport a dog or house cat. I was trying to get a good shot of her through the small holes in the cage but wasn’t having very much luck. Eventually, we were told that they were going to begin the transfer which, basically, involved opening the cage door and letting her loose in her new compound. Sounds simple enough, I can probably finally get a clear shot as she becomes accustomed to the new place.

It was at this point that Michael asks if he can send me into the compound to get the shot from inside. I, of course, was laughing at the absurdity of the idea as everyone agreed, “yeah, why not.”

Oh, okay. So, I’m going into a cage with a very large, very unhappy, carnivore. What’s the worst that could happen?

The expert from the zoo assures me that it’ll all be very safe, that I won’t be directly exposed to this huge, sharp, pointy tiger’s huge sharp pointy teeth, and that he will be right behind me the whole time.

I entered the compound and approached the closed door to the travel cage full of feline rage. She had calmed down a bit but was huddled in the back of the cage in darkness. I didn’t want to cause her any more stress than she was under already, but the man from the zoo told his people to rattle the door to the cage to get her to react. 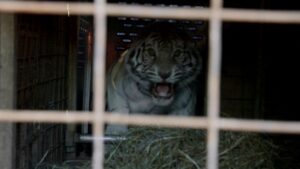 At that moment everything happened in a blur. The tiger turned and saw a man with a camera standing mere feet away, roared viciously, and bounded directly at me, planting a giant forepaw in her water dish and splashing me with cold water. The footage clearly shows that I was protected by the cage door but, in that moment, it seemed woefully fragile.

Anything for the shot

In retrospect, I know that everything was handled as safely as possible for the circumstance, but I find it slightly miraculous that my pants came through the experience mostly unsoiled.

I am extremely proud of my friends who have made this film happen and my own minor involvement in helping to bring it all together. It is a spotlight on an under recognized aspect of the plight of animals, both wild and captive and It is my sincere hope that everyone can find it as entertaining and educational as we have.

Page load link
Join The Cause

To learn the latest about actions being taken to protect tigers, please subscribe to our newsletter.